Defra recently held a launch event for Defra 3.0, the finalised biodiversity net gain (BNG) metric which will accompany the forthcoming Environment Bill. The importance being placed on this metric was signified at its launch by its promotion at an unusually high organisational level. This included a preceding statement by the Under Secretary of State for the Environment Rebecca Pow, while speakers at the launch included the Chair of Natural England Tony Juniper, Chair of the Forestry Commission Sir William Worsley and Deputy Director Agriculture, Fisheries and the Natural Environment of the Environment Agency Kevin Austin.

The metric provides a way of quantifying the habitat value of a site pre and post development with a proposed requirement that all development sites must achieve at least a 10% net gain post development. Natural England confirmed that the delivery of BNG under the Environment Bill will become mandatory for not only Town and Country Planning Act projects but also for National Significantly Infrastructure Projects (NSIP)s.

From the launch it was also apparent that Natural England is actively encouraging the development of a biodiversity market place and is promoting the opportunity for land owners to bring forward land for BNG.

Defra 3.0 represents a significant revision of the Defra 2.0 beta metric. It is the result of further development and takes on board the extensive feedback provided by users of Defra 2.0. Key updates include a greater recognition of the value of woodland creation, the incentivisation of advanced habitat creation and the ability to account for delayed habitat creation/enhancement as part of phased schemes, as well as updates to a variety of other habitat categories.

Also announced at the launch was a beta version of the Small Sites Metric (SSM), to simplify the process of calculating biodiversity net gain on smaller development sites, and The Environmental Benefits from Nature Tool (EBNT), to give developers a way of exploring the benefits habitats bring to people, such as improvements to water quality, flood management services and carbon storage 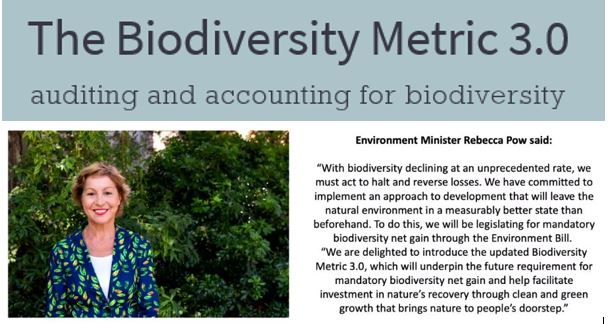